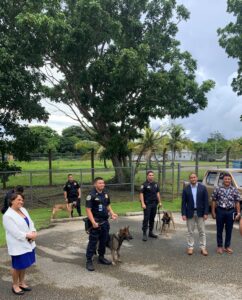 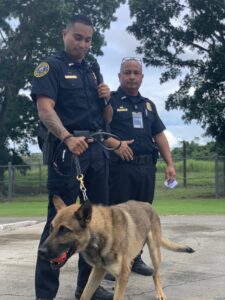 July 26, 2022- Tamuning, Guam- Guam’s drug interdiction efforts received a significant boost thanks to a partnership between the Office of the Attorney General (OAG) and the Guam Customs and Quarantine Agency (CQA) to add four drug detection canines. Yesterday morning, Dome, India, Szep and Vikki were introduced to Governor Leon Guerrero, Attorney General Leevin T. Camacho, and the island. These dogs will be critical to combatting the importation of drugs into the island.

“We are taking concrete steps to disrupt the flow of drugs into Guam and remain committed to building partnerships that support our hard-working law enforcement agencies,” said Attorney General Camacho.

For two years, CQA tried to secure contracts with drug detection training vendors, but were unsuccessful because of animal transport restrictions on commercial airlines flying into Guam. Earlier this year, the OAG rose to support the CQA and committed $60,000 for the procurement and transportation of the canines through a Memorandum of Agreement. Part of the funding paid for a charter flight that brought the dogs in May. They have been undergoing quarantine and testing since, but are expected to begin working soon.

CQA gave a demonstration on how the new drug detection canines will perform their work tasks when they are cleared. The canines are trained to work in intervals and sniff out different odors, then alert their handlers of illegal drugs. They will be utilized at the Guam International Airport Authority, the Port Authority of Guam, and the post office. The canines usually retire after five years and are typically adopted by a CQA handler.